is a leader and innovator of jazz music in the San 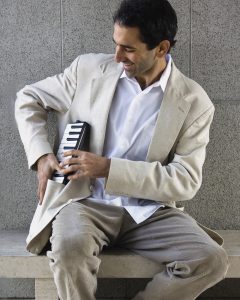 Francisco scene.  In 1998 Dan participated in the Kennedy Center’s prestigious Jazz Ambassadors program and toured India and Sri Lanka sponsored by the US State Department, representing America’s jazz tradition through teaching and performances.  After moving from Chicago to the San Francisco area in 2001, Dan contributed to blues legend John Lee Hooker’s final studio album Face to Face and toured with daughter and blues vocalist, Zakiya Hooker.  Dan studied under the tutelage of legendary jazz bassist Richard Davis at the University of Wisconsin and along with winning an award there as Best Jazz Artist in 1998.

In recent times Dan has been performing with acclaimed bassist Jeff Denson and his quartet featuring alto sax jazz legend Lee Konitz.  The group released a CD in February, 2015 and did a tour in Europe in October, 2015.  This summer, the Jeff Denson Quartet will release another CD, this time featuring bassoonist Paul Hansen (formerly with Bela Fleck) and is looking to tour again.  Dan also plays regularly with grammy-award winning violinist Mads Tolling (of Turtle Island Quartet), as well as with former Cirque De Soleil MD & vibraphonist, Christian Tamburr.

In the past few years, Dan has had major accomplishments including playing with Lee Konitz, playing for a highly successful Eva Cassidy tribute concert at the Strathmore Music Center in Bethesda, MD and playing regularly for the Modesto Symphony Orchestra.

Dan is currently a successful bandleader, having performed at the acclaimed Yoshi’s Jazz Club three times as a leader as well as at festivals such as the Angra Jazz Festival, the Filmore Jazz Festival, the SF Jazz Festival, the San Jose Jazz Festival and many more.  As an in-demand jazz pianist in the SF bay area, he plays regularly with top bay area jazz icons like Marcus Shelby and Adam Theis as well as his own trio featuring Zach Ostroff on bass and Alan Hall on drums.   As a teacher and clinician, Dan has been on the faculty at several major jazz institutions including Jazz Camp West, The Jazzschool and Lafayette Jazz Camp.

“While Zemelman possesses a lovely touch and fertile harmonic imagination, what stands out most on One Way Or Another is the probing lyricism that undergirds his group concept.  He gives his formidable collaborators plenty of space, but the improvisation is always tightly bound to the melodic line.  The resulting music is playful, tender, celebratory and consistently engaging, a rare project that compels a second, third and fourth spin.”

“The Dan Zemelman Quartet brings some serious jazz chops, and a bandleader who really knows his way around the 88s.  Expect satisfyingly complicated bebop, tough yet silky.”

“Zemelman is, after all, an intimidatingly good pianist. He uses choice voicings, he obviously listens carefully to his other band members, and he writes some interesting song heads….He uses cool modern harmonies and emphasizes the dark edges of each chord. His tunes propel themselves forward with driving rhythms, but in his solos Zemelman often moves in and out of time…..The material here doesn’t have the same intentionally difficult or earth-shatteringly experimental qualities that you sometimes hear in contemporary jazz, but it’s really well put together.”